So, while the house was the exact one we were going to build, there are things that need done to update it and make the house our home, naturally.  However, this house seems to be challenging everything I thought about my decorating style.  I am not a fan of white walls, and carpet (due to allergies, mostly).  And we have both in this house, and in some cases, they work, and that drives me nuts.  LOL.

The kitchen was really the only space that was updated, and beautifully.  It was one of the selling features of the house.  In the house, we were going to build, I wanted to add an area that was a wine/coffee bar, and it even has that!  It has two pantries, and we could finally fit all our food and kitchen gadgets where they belonged.  And it has an amazing breakfast bar area!  We added a microwave, and we will add two bar stools, and then it’s done, maybe. I am still a bit torn on whether to leave the walls white, they work in there.  It’s a nice offset from all the other colors happening in there.  A little fun fact; Ironically the tiles in the kitchen matched the tiles in our coffee table, a feature my BFF said showed it was meant to be.

BUT, the rest of the house will be updated, although it doesn’t need much to make it home.  The challenge will be the fact that it was a custom-built home.  Nothing in the home appears to be a normal size.  Updating custom homes can be expensive, which we don’t want to do.  There is nothing wrong with the custom areas and items, they just need updated.  So, I set out to figure out how to modernize on a budget, and I wanted to blog about it.  If I can do it on a budget, I want others to be able to do the same thing! (And I hated the fact that I didn’t have many pictures of the before and after from the last house we lived in.)

We started in the basement, which was not the intent.  I originally wanted to start in the harder area of the master bath and master suite, and decided against it.  Then my husband got laid off and he is not one to just sit around.  So off to Home Depot we went, and the ideas were set in motion.  In true fashion, we ended up starting several projects at once.

Out of these many projects, the first room to be fully finished is the bathroom downstairs.  It started out as baby poop yellow, and very plain. And really it was just dirty.  The basement was deemed “the man cave” by the previous owner.  He had run an extension cord from the full-size closet, through the wall to the plug in (totally not up to code and a fire hazard).  He used that closet as his own little make shift kitchen (which causes a lot of mouse droppings everywhere!).  I am not sure he ever left the basement. 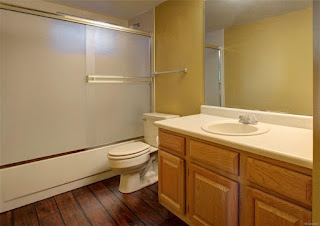 This bathroom is newer than the other two.  At the end of the day it needed less work.  It only needed “flair” added to it and a few things fixed here and there, and of course a different paint color!  I love day of the dead stuff and have always wanted a room that I could use this theme.  So, this room became it. We cleaned it up. We painted it the same color as the basement, just to keep the flow.  The shower area was fine, just needed color.  So, we added some inexpensive tile stickers to give it color.  We moved the towel rack from over the toilet (this is where they liked them, it seems) to the wall where it made sense.  Added a toilet paper holder and hand towel holder (it didn’t have them, oddly).  We added shelving above the toilet to house my décor, and the simple changes were done.

The biggest change was the vanity area, and this is where we splurged.  The vanity itself was in fine shape and we wanted to keep the natural wood look.  But I disliked the countertop a lot!  At first, we were going to just replace the entire counter top, I shopped around and realized because it was an odd size there would be a lot of modifications needed.  This equals money.  So, I decided to just cover it.  I used this method in the remodel of our camper and it has worked just fine.  The first contact paper I bought was awful.  Turns out it wasn’t true contact paper and ripped and was hard to work with.  So, I had to go to plan C.  Eventually I found something that worked and went on much smoother…. Walla, new counter top! Next, we added a new light fixture!  Then came the most expensive part of the update, and the most time consuming.  The tiles around the mirror!  It seems they LOVED big mirrors, they are all over the house, and mounted in such a way, that it would damage the walls to remove them, and would be much more of a hassle than we really wanted to deal with.  So, I researched how to update mirrors.  Pinterest has become my BFF in this process.  The challenge was, how to add the tiles to the mirror.  Turns out there is mirror glue!  WOOHOO!  Problem solved. I found authentic tiles on Etsy, and set out to create a border!  And with that this bathroom is complete and like new!  And while it might be a bit over the top, it turned out amazing!  And the best part, it only cost $219.62.   Project 1 is checked off the list. 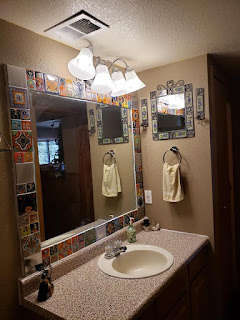 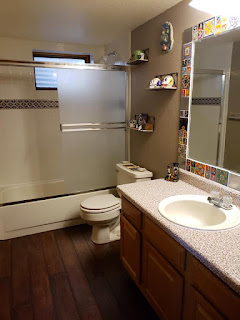 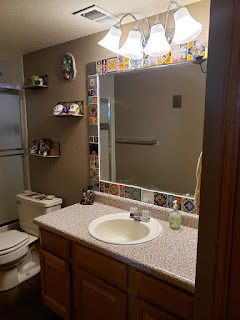 Posted by Casebolt Clan at 3:01 PM No comments:

Casebolt Clan
We are a simple family of 4 who loves adventure.